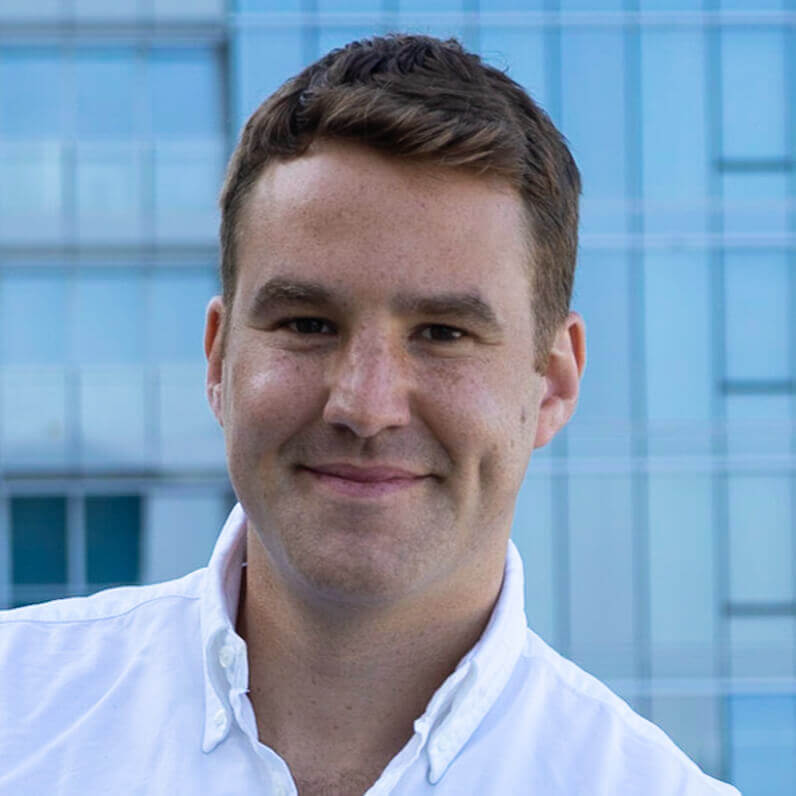 e are thrilled to share the story of Blitz Creative today, a business that creates professional storytelling content with elite athletes and premier brands. President and Creative Producer Jared Blitz, a Novo customer, spent a dozen years honing his craft as a content wizard before launching his company. We sat down with Jared to learn how his athletic background, industry experience, and dedication to his craft led to the inception of Blitz Creative.

What Is Blitz Creative and How Is It Different?

In 2019, Jared Blitz created a content studio aimed at tearing away the layers between brands, elite athletes and top-flight creative resources to produce premium content that leaves audiences feeling something profound.   One of the things that appealed to us the most about Blitz Creative is its name--quite literally, he is the name on the door. Entrepreneurs are paying more attention to creativity as a valuable business element to foster success, and Jared’s company is deeply connected to this element.   When asked to describe his business, Jared calls it “a first-of-its-kind premium branded content creative studio that focuses on professional athlete-driven narratives.” The studio makes content with leading professional athletes and brands that goes beyond statistics, focusing on the stories behind these high-level athletes.   [caption id="attachment_1056" align="alignnone" width="687"]

Quinnen Williams - NY Jets[/caption]  And with their creative talent and resources, Blitz Creative can tell these stories in a way that resonates with the audience at a human level.

When and Why Was the Studio Formed?

Blitz Creative formed in 2019, and the cost to launch the business was neither too little nor too much. Jared says he’d “argue that the experience and expertise gained through twelve years of studying, apprenticing, and practicing the art of premium content producing was a major investment in its own right.”  Jared spent 22 months as an unpaid Hollywood intern, followed by six years apprenticing for some of the industry’s most talented producers, writers, and studio executives. “Remember Lloyd in Entourage?” he says. “That was my Hollywood story.”  However, even during the darkest days, making coffee runs as a 26 year-old for four bosses, Jared had the entrepreneurial spirit and always knew he’d stake out on his own one day. In fact, the motivation to run a business began back in grade school when he first started shoveling snow with his nextdoor neighbor and best friend, Thomas Cramer, raising capital for shovels and salt from family by issuing stock in their company, Sunny’s.  He’s come a long way since those days, as the spark grew into a fire over the past several years that saw Jared transition from traditional entertainment to gaining expertise in the burgeoning original branded content world.  Networking is key in any industry, and Jared soon learned how frustrated industry leaders were with the existing sports content landscape. From high costs to subpar productions and disengaged talent, Jared knew there was a gap in the market. “I believed I could help solve [these issues] better than a traditional agency or publisher.”

Who Are Some of Your Clients?

Jared has worked with some incredible clients so far in his career, including Hyundai, the Korean car giant. Jared led five original series supporting the brand’s NFL and NCAA partnerships with bespoke, premium content. These series, including three seasons of the multiple-award-winning Rolling with the Rookies (2017, 2018, 2019) highlight the deeply personal stories of athletes, the struggles they’ve faced to reach the top, and the grit they developed in the process.  Blitz has worked with plenty of other clients you may have heard of, including Microsoft, Mercedes-Benz, Can-Am Spyder, Movietickets.com, and Greyhound.

Before Blitz Creative was officially established, Jared worked on a project that sticks out to him as one of the most memorable.

In early 2017, at my former company, I had the honor and privilege to lead the creative process of producing content for Microsoft’s Special Olympics partnership. We worked across five continents with athletes representing the intellectually disabled community, telling beautiful stories of mutual empowerment through sport, art, and entrepreneurship.

Can Batten (DP), Richard Mullane (Director) on set of #WeAreMore Microsoft Special Olympics shoot in Germany[/caption]  One such story was that of Virginia Wade, an athlete in the Special Olympics who loves to ski. The video shows Virginia’s dedication to the sport as she teaches actor Josh Peck how to do the “pizza” and “french fries” skiing poses. She is also a talented musician who wrote her own full-length musical. Josh Peck helped Virginia bring the musical to life with some musician friends, ending the video on a heartwarming note.  [embed]https://www.youtube.com/watch?v=jUWTVly51HU[/embed]  When asked if he was a storyteller, Jared said he is, but he thinks of his team more as “story enablers” when they’re doing their best work. “We are giving voice to others, allowing them to tell their stories while we get the heck out of the way,” he said. Sharing the stories of these collegiate athletes, NFL players, and Special Olympics stars as beautifully and accurately as possible is what Blitz Creative is all about.  After all, Jared says the three words he most closely associates with entrepreneurs are “leadership, empathy, [and] resiliency.” And these words are at the core of the story of Virginia and many others.

Some of Blitz Creative’s most significant challenges have been identifying the potential clients who are truly committed to investing in premium content. Something can be gained out of every conversation and pitch process, but adequately evaluating who’s real and who’s just paying lip service is an ongoing challenge.  It’s always a great learning experience to work with “brand-side thinkers,” Jared adds. Names that come to mind include Brett Lyons at Intel, Brooks Thomas at Southwest Airlines, Drayton Martin at Dunkin’, Chad Parizman at Pfizer, Courtney Colwell at American Express, and Dan Phelps at Wells Fargo. “These are people I love to bounce ideas off of because they make projects better, they have all been tremendous resources, in their own way, who continue to push us to do great work.”

What Are Your Thoughts on Failure?

The entrepreneurial spirit is often associated with being able to embrace failure by learning from it. Jared echoes this sentiment when thinking about his days as a hoops star.

Not winning a pitch, that’s fine, as long as we can learn from it and get better. But as a basketball player, my coaches used to say we ‘win games in July, not January.’ Preparation, practice, and surrounding ourselves with the best people for the job, is our job.

While failing at winning business is something to learn from, failure is not acceptable at Blitz Creative when it’s time to produce for a client. The company’s clients and talents expect the highest quality production, with the most value for their dollars, and that’s a promise that Jared and his employees must deliver on.  As previously mentioned, “creativity” is an essential ingredient of the entrepreneurial world nowadays. Jared defines the concept of creativity as “how we overcome unexpected challenges with limited resources under strict time constraints.” Keeping this idea in mind, there’s no excuse for going to a client and telling them you failed. That’s “not how we roll,” he says.  [caption id="attachment_1058" align="alignnone" width="619"]

Last Time You Took a Vacation and Unplugged?

Jared calls having regular vacations “critical” to him and his wife, Sara Wolf, a corporate attorney in Los Angeles. The pair were long distance for five years, and their airline miles would go towards adventures across the globe. Money and experience are investments, and one could say the same about travel. “Changing perspectives and exploring other cultures is so critical to our personal and professional growth,” Jared says.  He adds that his brain is always on, which he doesn’t particularly see as a bad thing, although his wife might. This past summer, the couple went on two week-long hiking excursions, one in Switzerland and one in Norway. Some of Jared’s most creative and productive “ideation sessions come during the deepest moments of calm in the mountains.”

Many believe in sticking to a strict routine to maximize their focus and productivity, but Jared instead keeps a very irregular schedule intentionally. Nevertheless, discipline is still a key part of his life, and every day begins the same way.   It starts with matcha green tea and hot oatmeal with frozen wild boreal blueberries with his wife. He likes to stay active, so he exercises regularly by playing basketball, tennis, lifting weights, biking or spinning, doing yoga, and hiking. “At least one of these things needs to be done every day,” he says.  The Blitz Creative founder believes in diversifying his daily schedule as he finds his productivity increases when the day feels fresh. “Changing surroundings and creating accountability are other great ways to stay productive,” he says.  Jared sees the evenings as a time to destress and decompress, so he and his wife take a walk around the neighborhood. His morning routine, work, exercise, and evening stroll all keep the stress away for the night hours.   Afterward, Jared leaves his phone in the other room, takes melatonin by 11 p.m., and gets eight full hours of sleep every night.

Why Choose Novo? What Other Apps Do You Use?

'I needed a nimble, smart banking solution for the new creative economy, [a platform] that embodied the scrappy, underdog mentality that I see vital to our success. It feels like we are fighting together, for each other,' Jared says about Novo.

Jared with the Novo team at our NYC office[/caption]  He also uses Dropbox, Vimeo, and Splashthat for his business needs.

Best Piece of Advice You Can Give Entrepreneurs or Creatives?

As we’ve mentioned before, investing in yourself is an integral part of creating a successful business. Jared believes there are three things budding entrepreneurs can build upon every day: “network, knowledge, and know-how. We are the sum of these parts with passion as the x-factor multiplier,” he says.  During the days when the passion isn’t there as much, you can still improve. One way is by reaching out to someone for coffee, tea, or even a walk. You could also read an interesting article to gain knowledge, or learn a common acronym you have yet to figure out and develop know-how.

What Can We Look Forward to With Blitz Creative?

It looks like we’re only getting started with Blitz Creative as the company has a lot of exciting projects in the pipeline. The business will be shooting this fall and Jared can’t wait to deliver success stories for his clients that he continue to build upon.  One such project you can expect is the first season of First Moverspresented by NOVO, featuring the “real stories of today’s entrepreneurs,” as Jared says.

The story of Jared Blitz is one that inspires entrepreneurs everywhere to improve every day. With Blitz Creative, he is truly embracing the underdog spirit, and practicing bringing excellence to his work on a daily basis. There are plenty of great athlete-driven narratives the business has produced already, and we can’t see what else they come up with moving forward.